Ready To Get Back On The Bike

So Team Sales Factory is making the 80-mile journey to Charlotte, NC to ride in the 24 Hours of Booty bike race to benefit the Levine Cancer Institute and the Livestrong Foundation.

I am benefitting from the fact that Alex is at the helm of the car, which affords me the opportunity to blog about the experience. This is the second consecutive year that I have ridden in the race, but it marks “Team Sales Factory’s” inaugural appearance.

Six of us have raised the $400 minimum amount to ride in the race which will feature nearly 1,200 riders who help to raise over $1.2 million for the cause.

For any and all of you who are interested, I will blog about the experience every few hours (which will let me get off my bike) and update my website.

Well, for now I am off to respond to a few emails before we arrive in the Queen City and I get on the bike.

Update #1: 5:25 PM
So we are now all set up. The 10’x10’ tent is up and the bikes are tuned and ready to roll. Thanks to the Trek store in Greensboro for getting all the bikes checked out and ready for the ride. Though it’s not a race, the pensive feeling I get before running a road race is certainly present as we sit about 35 minutes away from the start of the ride.

The first few laps will be parade laps, so they will go slow and we anticipate the real riding will start around 8pm. 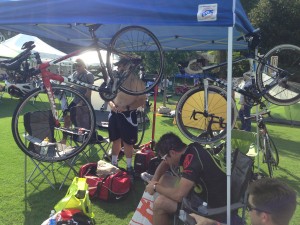 “Bootyville” as the campsite is affectionately called is, is bustling with activity already and Team Sales Factory has got to be one of the favorites to win the best team jersey (kit as it’s called in the cycling world). A big shout out to Matt Goldfarb for the design.

It is also a time to think back and remember all those who have been affected by cancer. Those who have succumbed to its harsh reality and those who are battling it right now. We ride for you tonight. In celebration, remembrance and support.

Matt and Ged’s mom and dad. Alex’s stepmom’s mother. My old running partner Jen’s dad. We ride for all of them tonight. The parade lap will be a somber reality of what cancer can do, but those riders with “survivor” emblazoned on their bibs are a reminder that this disease can be fought and the fight can be won. Those thoughts will be with us all night.

We will check back in later as we are assembling to line up for the parade lap.

Update #2: 8:36 PM
After the first hour of slow parade laps, we settled into a slower than usual pace but we were able to get some laps in before stopping for dinner at 8:36 pm. To say that it was an inauspicious start would be an understatement.

Traffic hurt Ged and Matt but hurt Matty Goldfarb even worse. He got to Charlotte right before the start and had to hustle to get ready. He forgot his shoes in the car and had to double back to get them. His bib shorts weren’t strapped before he put his top on. Just little stuff.

That was, until we started riding. His electronic shifters on his bike weren’t working. Why? Because his batter wasn’t there. Not that it wasn’t connect…it wasn’t present. It is home in Greensboro. 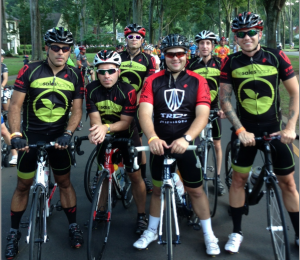 Oh well. Fighting cancer is a hard battle. So Matty G continues to power on. It’s getting dark. Time to switch lenses to clear and get back on the bike. Nothing exciting to report at present. Stay tuned. The hijinx are soon to pick up and the miles will continue to get ticked off the counter.

Update #2: 10:51 PM
56 miles in and my quads are hurting already. I have been clipping off laps at just under eight minutes per lap which translates to just over 20 miles per hour for a pace. I was thrilled with the pace and lap times, that was until I got off the bike and my quads told me that they weren’t exactly thrilled with me.

I need to keep this update brief as I want to try to hit 75 miles by midnight, a goal that looks to be firmly within the realm of possibility if I can keep a decent pace of 18 mph for the next 90 minutes.

The course is dark and many of the riders have decided to take a break for awhile so the next few hours should afford those of us who are still up for the challenge, the ability to crank off some traffic free laps.

The whole team is doing well. Mike Fowler has a sore back and has retired for the evening, but I know he will be back in the morning and will get his mileage in. There is no doubt that he will hit 100 miles with relative ease.

Ged, Matt and Alex are taking a break but are doing well in their mileage. Matt is feeling strong and Alex looks to be getting a second wind. Ged however, is really impressing tonight. His doctor told him to take it easy as his asthma has been sidelining him lately. The doc told him to limit his riding to 50 easy miles. That won’t happen. He hasn’t said it yet, but he is going to try to hit the century mark for sure.

Update #3: 12:07 AM
77 miles in. Whew. My butt hurts. My quads are on fire. The goal when I started tonight was to get 60 miles in before midnight, but the pace was ahead of schedule. The aero bars on the bike have served as a welcome respite so that my back isn’t as upright and I truly think that has helped give me some extra speed tonight.

The course traffic is light and the city of Charlotte seems to be asleep, which is weird because it is just after midnight on a Friday night. It is kind of eerie as the vehicle traffic on the course is very light, if at all.

While the 1,200 riders taking on the “Booty Loop” is certainly impressive, I have been admiring the four guys who have been running the loop since the 7:00 PM opening ceremonies. Sporting Olde Mecklenburg Brewery jerseys, they have been running for a full five hours and, judging by their pace, they have completed nearly 30 miles on foot. I am envious of them as they keep their pace and click off the miles. We runners stick together, and these ultra-runners are going to try to go for the duration. True warriors.

With 23 miles to go for a century, I need to get back on the bike. I’ll go fill up my Cigna (thanks for bailing me out by giving me the free bottles because I forgot mine) water bottles with lemon lime Gatorade (I do not enjoy the orange flavor) and grab a granola bar and I’ll be back at it. Not that anyone is reading this, but I will check in again in a few hours. The goal is to be done by 2:00 AM, or so.

Update #4 – 2:03 AM
I am beat. My legs hurt. My butt is even more sore. I’m soaked with sweat and my back, which never bothers me, is not my biggest fan right now. I guess that is what happens when you are scrunched up on a bike for almost seven consecutive hours.

But the century mark has been achieved, all around 2:00 AM. Not too bad. As I made my way back to the camp, I found all the boys putting their gear back on. After a 30 minute rest Ged and Matt have decided to go back out on the course and hit their century mark goals. Matt needs 30 miles and Ged needs 33 to hit 100 miles and they will do it with ease I think. But it will be 4:00 am before they are finished. 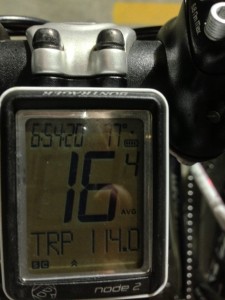 Update #5 – 3:11 AM
My riding night is over. On the fourth lap around the booty loop with Matt and Ged, I noticed, out of the corner of my eye, that Alex was on the side of the road looking at his bike, accompanied by two other riders. Upon turning back around and checking out the situation, I found out that Alex had broken a spoke and his night was done. That was all the impetus that I needed to pull the chute myself. 114 miles in. Two more miles than the official Ironman distance. I will take it.

Time to pack up, go to the hotel and sleep. I don’t know whether we will come back out tomorrow (today really) but if we don’t, I am happy with 114 miles. So for now, a shower and bed are calling my name.

Update #6 – 1:11 PM
As has been the case for the entire summer, it is pouring in North Carolina again. The rain and thunderstorm accompanying it have closed the Booty Loop course for the past hour and even though my body is telling me I shouldn’t ride anymore, I am going to use the rain as the excuse for not riding today.

So, my 2013 24 Hours of Booty is complete. Ged, Alex, Matt and I enjoyed a huge calorie lunch at the Burger Company on Morehead. Cheese stuffed burger patties, chicken wings, friend pickles, a milkshake for me and of course, Diet Cokes. I truly love that place. I am stuffed and content and we are headed home.

Closing:
The 2013 24 Hours of Booty is in the books for Team Sales Factory. Alex hit the high 70’s in miles. Ged, Fowler, Matt and I all topped 100 miles and Matty Goldfarb hit 80 miles, all in one gear, basically turning his carbon fiber road bike into a really expensive fixed gear bicycle. A bike which he cranked out nearly 80 miles on. Impressive.

The 1,200 riders raised 1.3 million dollars and a wealth of awareness for the fight against cancer, all while celebrating the lives of those afflicted with the terrible disease. Until next 24 Hours of Booty, or at least until the Tour to Tanglewood ride to fight MS, Team Sales Factory will go back to training.