No Matter How Much You Travel, The World Is Just A Great Big Place

Let me start by saying that I consider myself pretty well-traveled.  My passport has stamps from 14 different countries (and I don’t count Canada – because let’s face it, EVERYONE makes it to Canada) and I have spent more than a few hours on a plane en route to some far-off destination.  But no matter how many places you go, it always seems like there are so many more places to put on your “to do list” to visit.

And despite the world sometimes seeming so small – with the proliferation of communications devices that literally make my friends and colleagues more than half the world away accessible with the click of a mouse – we sometimes forget that the Earth is 196,939,900 square miles (510 million square kilometers for my friends on the metric system) large.

However, one thing can unite the entire world and capture the hearts and minds of the 7 billion inhabitants of the planet, and that unifying event is unfolding as I write this post…the World Cup.

Now I know what you are thinking…”I’m not a soccer/futbol (call it what you will) fan”.  Well, for one month every four years, you are.  Admit it.  You may not be glued to every minute, but you are paying attention.  Secretly you are pulling for your new favorite team, whomever that may be.

Here’s my disclaimer – I consider myself a fairly knowledgeable soccer fan.  I played college soccer.  I was excited when NBC announced they were going to broadcast the English Premier League here in the US.  I watched World Cup Qualifying matches.  I watched the international friendlies and I am pretty certain I own at least the last three US Men’s National Team uniforms (and YES, this year I even bought the shorts – you are more than welcome Nike, they fit great).  However, I am enjoying this World Cup more than ever before.  Why you might ask (or maybe you didn’t ask)?

Because for the first time ever, I am fortunate enough to work for a truly global organization.  Again, you may be asking “What does that matter”?  Because every day I am surrounded by people from all over the globe.  Normally I don’t really notice it because Spanish and Portuguese is as commonplace in my office as English – both American English and the Queen’s English.  However, this week, I can’t help but notice just how global we are with the vast array of national team colors that are on display.

A quick tour of the offices on my floor will see two Indian nationals (despite their team not qualifying for the World Cup they are both – strangely enough – pulling for Brazil), two Venezuelans, three Colombians, a French Canadian by way of Portugal, five actual Brazilians (who are DEFINITELY pulling for Brazil as I don’t think that they have taken their jerseys off yet), two Aussies (whose Socceroos actually have played pretty well thus far), three Swedes (I think they are rooting for the Dutch, but I can’t really tell), one Englander (who, despite pulling for the three Lions still has ALL his teeth and isn’t drunk all the time), a guy from Indiana, an intern from South Florida and one Italian from Central New York (me). 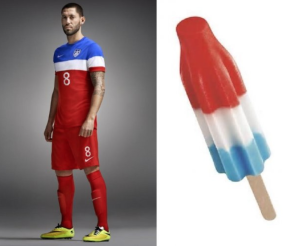 I defy you to tell me that you don’t see the similarity between the rocket pop and the USMNT jersey. I defy you.

This cultural hodgepodge has made for quite the first week of the World Cup.  Jerseys and flags hang in nearly every office window.  The wireless network that allows us to stream ESPN to our iPads has become used only for watching the World Cup.  Today there was a “Uruguayan Market Segmentation Meeting” at 3:00 pm during the Uruguay vs. England match (and I don’t think we even sell trucks in Uruguay – and the meeting was at Buffalo Wild Wings) and every single member of our Latin American team (and the Englishman) disappeared for three hours during the Colombia vs. Ivory Coast game.

It has been an awesome experience, and we still have three weeks of soccer left to watch.  So as I prepare to wear my USMNT jersey tomorrow – yup the one that looks like a rocket pop – I truly look forward to spending a great bit of time discussing the World Cup with a colleague who swears allegiance to a country that I have likely never visited.  But you can be sure a visit there is on my list.

© 2014 All Rights Reserved, designed by TeoThemes