Isn’t It Weird. Isn’t It A Coincidence. Isn’t It Ironic?

Ok, so maybe the title of my post doesn’t really have anything to do with what I am actually going to write about.  Well, ok, the first two parts do while the third is a reference (albeit a less than vague one) to that delightful piece of recording history that is Alanis Morissette’s Grammy nominated single (seriously National Academy of Recording Arts and Sciences, what were you thinking?)  “Ironic” from an album that somehow sold 33 million copies worldwide.  33 Million copies?  REALLY?  Oh well, she won five Grammys for it and I guess I’ll just chalk up that success to a period in music history that couldn’t recognize true musical greatness..yes, I’m looking at you Rob and Fab.  Girl you know it’s true. 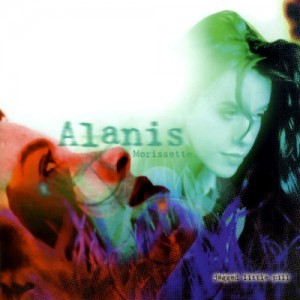 33 Million Copies? Wow. I Can’t Believe It Sold THAT Many.

But I digress.  Now back to the original topic at hand.  I went shopping yesterday morning (and no, I did not go to Victoria’s Secret – just walking by that place makes me feel dirty).  Who cares right?  People shop everyday.  But during my rounds, I ended up at Best Buy.  Intentionally.

I went to buy the LG Lifeband to try it out.  It is my fourth wearable fitness tracker.  I started with the Up band by Jawbone.  It was the first of the wearable fitness trackers, if my memory serves me right, and it was cool, until it just stopped working correctly – which I believe was about 72 hours after purchase.  Being the first to market was not kind to Jawbone and they ended up refunding nearly all of the early adopter’s units and have since released a new version, a version which I have not, and will not, try.  They did a great job refunding our purchases and while I respect their responsiveness, I will not try it again.  So that left me looking for more.

Then I graduated to the FitBit flex, which had its limitations from the start.  Crappy battery life and no actual timekeeping ability, despite being the size of the average watch.  However, the sleep tracking thing was cool, for about five days, until I stopped wearing the thing.  And, let’s be honest, I could have done a better job designing the thing.  From an aesthetic standpoint, it was – to be kind – lacking.  So that was number two.

Third up was the Garmin VivoFit.  It was a great product.  I liked it.  For two months.  It had heart rate functionality – provided I didn’t mind wearing the chest strap and feeling like RoboCop all day.  The chest strap requirements made heart rate an “only when I’m working out” option and then I forgot about it completely.  Intentionally.  The Garmin was cool, for a bit.  It did a lot of things the others didn’t.  But I have another Garmin that does more.  Actually two of them.  I have my Garmin Forerunner 620 running watch that does so many things that I can only keep track of half of them, and then I have some iPhone sized Garmin that I mount to my bike that tells me just how slow I am actually riding.  It also, apparently, tells me how to get places just like a Garmin in-car navigator, though I can’t really figure out how to use it.  So for now I am just mounting the thing to my handlebars and hoping it impresses someone who sees it.  Though the spandex that I wear when riding pretty much guarantees that any awe that the Garmin inspires will quickly be negated by the spandex.  So I guess I’m even on that.  But anyhow, the Garmin lasted a lot longer than the previous fitness trackers.  But it too went the way of the junk drawer.

Now I am on to the LG Lifeband thing.  It is way cooler looking, in my opinion.  Now don’t get excited.  It’s no Jony Ive-inspired industrial design.  Nope.  We will have to wait for Apple to release their shiny silver (I am guessing) iWatch or whatever the hell they are going to call it, in the fall or the spring or right before Christmas and we can all wait in line to hand over our money and feel inadequate until we get our hands on Apple’s next “revolutionary device” (lets just hope it actually tells time). 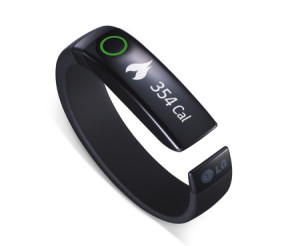 The newest addition to my fitness tracker family. The LG Lifeband.

I’ve only had it one day, so reviews are still out.  I like the look, I like the features and I can actually control my music via bluetooth as I workout, right from my wrist.  I like that feature.  So, so far so good.  I give it a 50% chance that I use it beyond six months.  And that leads me back to the title of this post.  Isn’t it weird, or a coincidence that I buy my fourth fitness tracker yesterday and today I go to FastCompany.com and what is the article that pops up first.  Yup, you guessed it, it’s all about fitness trackers.  It’s an examination of the “next big thing” in the fitness tracker product line.  And this one actually LOOKS like a watch.  Interesting.

So, I ask you, isn’t it weird that you buy something or do something that you think is random and then – bang – you are exposed to it?  It’s like buying a white car.  You buy it because you tell yourself “man, no one has a white car.  I’m going to buy one.”  Then you buy one and realize EVERYONE has a white car.  Is it weird?  Is it a coincidence?  Or is it just that because I bought a white car or a new fitness band that I am paying more attention to the number of white cars on the road or the articles published about fitness trackers?  I don’t know.  Just food for thought.  I will think about that when I am wearing my new fitness band (#4) and driving my white car to work tomorrow.  Who knows, maybe “Isn’t It Ironic” will come on the SiriusXM on my way in to the office.

© 2014 All Rights Reserved, designed by TeoThemes