Anyone who knows me intimately will tell you, if you ask, that I am a documentary film aficionado.  On any given Saturday of the year, after begrudgingly completing my long run for the week, I can be found in front of my television, my laptop or iPad engrossed in a documentary film, many of them so obscure that they are buried deep within the annals of the iTunes and Netflix libraries.

This past weekend was no different as I watched four documentaries in succession.  The third of them was perhaps the most thought provoking of all as it really resonated with something that I experience on a regular basis in my daily life inside of a marketing and creative agency.  The 2011 documentary by directors David Dworsky and Victor Kohler, “Press, Pause, Play” explored the digital revolution of the last 10-plus years and examined its effect on the “creative industry” as a whole.

My desire isn’t to ruin your potential enjoyment and prevent you from watching the documentary yourself, as I truly think that anyone that consumes media-in any form-should experience it, but it did make me think. 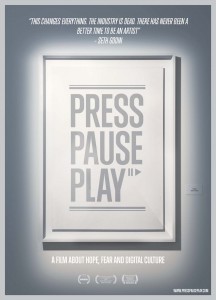 “A Film About Hope, Fear And Digital Culture.” Has the proliferation of technology changed art forever?

As it always does, the price of technology decreases over time.  This new, lower-priced technology has effectively removed the barriers to being creative. The secrets, once fiercely protected by the film school graduate Hollywood types, are out in the wild now. We can all be artists.  All it takes is the easily accessible technology that surrounds us in our daily lives.   The inexpensive HD camcorder for those who are serious about their craft to the most versatile full motion/still camera that I have ever owned, the one that I carry around in my pocket at almost all times…my cell phone (I’ll stay brand neutral for this rant).

This proliferation of technology into the mainstream has, in effect, changed the entire industry.  Artists of any caliber can communicate directly with an audience. It’s equal parts being scared because you don’t know where your next paycheck is coming from but equal parts optimism because you can get your voice out there much easier than at any time in history.

The timeline to success has been truncated. It doesn’t take nearly as much time to “make it” anymore. Barriers to entry have been effectively eliminated – predominantly time, experience and cost. The acceptance of digital technology has changed the landscape. We get our art digitally; create our art digitally; pay for our art digitally. It has introduced an unprecedented level of collaboration to an industry that was once an egalitarian “those in the know” club.

This paradigm shift is particularly scary for the movie and music industries.  Why? You ask.  Why wouldn’t they be excited to reap the benefits of a technology that dramatically increases access while at the same time reducing cost of the production of what used to be a very expensive product?

The industry is scared because the proliferation of technology has eliminated the need for the “industry” itself.  Artists can create, market and distribute their art themselves.  The power has been shifted from the industry executives and the artistic machine to the individual artist.  Home studios, inexpensive equipment, digital marketing, social media and the rise of sales tools like Amazon, PayPal and Square have given back the power to the artists.

The Internet has democratized everything.  And the romantic in me thinks, “That is exactly how it should be.  About time.”  But it also begs to question if the blurring between audience and artist has killed the art as a whole?

When everything is dictated by the amount of clicks, likes and +1’s, are we, by definition, undermining the seriousness of the creative/artistic endeavor?

If the proliferation of mediocre art (due to the fact technology can allow anyone to make art) continues will we lose quality art as we know it?

For certain, these are questions that have yet to be answered.  However, we cannot deny that a paradigm shift has occurred, and continues to evolve.

Creative expression is everywhere.  Even the most staunch, process-driven individuals secretly want to be creative.  From stitching together clips of their kids’ soccer games in iMovie to applying a filter to a photo in Instagram, everyone wants to be creative and social media has given everyone access to an audience while, at the same time turning us into voyeurs on a global scale.

The movie and music industries aren’t the only ones who should be scared.  The traditional agency model that we know should be forward-looking and has the right to be nervous.  The millenials are coming, en masse, with their creative aspirations, affordable technology, social media delivery vehicles and digital wallets.

They don’t want to work in cubes.  They want to have multiple virtual offices in whatever Starbucks, Panera Bread Co. and microbrewery is close by.  They want to work on their own and they are not only doing it, they are doing it well. Agencies aren’t needed and if that doesn’t scare the traditional agency leadership…well…it should.