My Diet Is Terrible. I Know It And I Need To Change It. But I Run.

Let me start by saying that my diet is terrible.  I know this.  It always has been.  Always.

It’s not like I woke up one day several years ago, after 30 years of healthy eating, and made a conscious decision to forgo eating any and all vegetables and replace them with the spoils of deep fried goodness.

Nope.  That didn’t happen.  I didn’t modify my diet.  I have always had the dietary habits of a 12-year old girl.  Chicken fingers.  Check.  Pizza.  Yes please and make it a large.  Macaroni and Cheese.  You betcha, but the good Velveeta kind with extra fat in it.  And you’re damn right I’m going to eat the entire box right out of the pan with a fork.  Servings per box?  It matters not if I can eat the entire box in one serving.  That means, to me, that is one serving.

One of my colleagues at the Sales Factory told me that every time that we bring lunch in for the office, she knows whether or not I am going to like it simply by the color array laid out before us on the conference table.  If it is not a combination of brown, tan or yellow (she just lumps it in as “beige”) she knows I won’t eat it.  If it has any of the more familiar colors associated with vegetables (green, red and orange primarily), then it will be a hard sell to get me to eat it.

I don’t need anyone in the medical community to tell me that my diet is simply cringe-worthy.  I know it.  But I drink Diet Coke like most people drink water, and that has no calories, so that is a win for me, right?  Not according to the delightful new things I am hearing about how great Aspartame is for me.  So now I am 0-for-2. 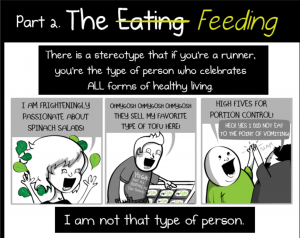 I run but that is the full extend of my healthy lifestyle. I care not about my diet and it is evident.

That leads me to my next segue.  About two years ago I became a competitive runner.  It started with a few training runs with a friend who was training for the Boston Marathon.  Now, I was a two-sport college athlete, so the working out concept was not foreign to me. These runs rapidly turned into 5K’s, 10K’s, that intermediate race distance between a 10K and a half marathon, half marathons and marathons.

In my first year I ran 11 marathons and have trimmed it back to just four this year, so the running thing came kind of naturally to me, I guess.  Not the running for the sake of running thing, but the being physically active, that part was natural…kind of.  And now that my metabolism has slowed to a crawl I have a new motivation for running.  So I can continue eating all the crap that I shovel into my mouth on a daily basis and feel not so bad about it.

I have had this rationale in my head for as long as I can remember now.  “But I ran today, so why not eat as many chicken wings as Joey Chestnut ate in his last Ultimate Eater competition?”

Today I realized that I was not alone in my thinking and, not that it makes it correct, it does make it more universally accepted than I had previously considered.

But Chris how do you know you are not alone in your thinking?  Well, that proof I owe to another co-worker and fellow running fanatic, Dena Harris.  She provided me with the greatest graphical representation of my dietary habit vs. running conundrum.  It is as follows…Enjoy

“The Feeding” as originally published by The Oatmeal.