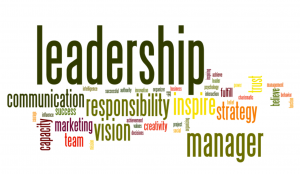 What I thought I would hear from those who know me best.

Long ago I texted a number of friends, colleagues and associates and asked for one word that best describes me. I had visions of kicking off this ABOUT ME section with a word cloud of their responses that would look something like the image you see to the right.

Instead, after what would prove to be no shortage of replies to my “tell me about me” query, what came back in those texts, emails and phone calls was something completely different.  That exercise in improved self-awareness was just over three years ago and helped to provide the impetus for continued introspection.  Since that time I would like to think that I have continued to change – both privately and professionally.

Not that the original responses were negative (in the interest of transparency, they weren’t 100% positive – but more good than bad, for sure), but there is always room for improvement.  So, three years later I repeated that same exercise, hoping again for a word cloud that mirrored what you see above and to the right.

However, not to my surprise, my “about me” word cloud came back to look more like what you see in the image below left: 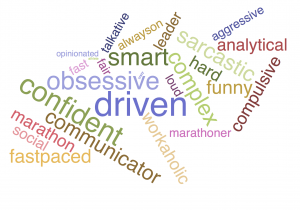 What I really heard from those who know me best.

Even my best friend Billy [see photo below right] cursed at me when I asked him for his response. Well, okay, he just sat there staring at me while begging for a treat, but still, the message was clear.

Honestly though, dogs may tell us more about management and leadership than we give them credit for. But that’s a story for another time. 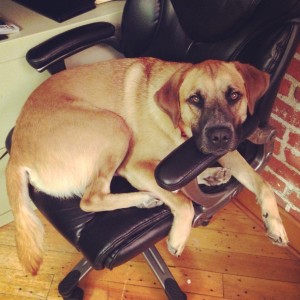 My best friend Billy. Or as I like to call him, Sir William.  He has put up with me for more than five years.

So, to provide a bit more clarification into who I am and what I am about, it seems that it’s up to me to tell you about myself. Here’s what I know. I am a transplanted NY’er of Italian heritage who is an avid marathoner (31 down and counting – so that’s probably where the “crazy” part in the word cloud comes in), wannabe cyclist and former two-sport college varsity athlete who played both Division I lacrosse and soccer. I’m a fierce competitor but the truth is that I really do it because I also look damn sexy in spandex (and no such luck on that coming up in the word cloud).

I joined the insightful research-based marketing firm thesalesfactory in 2010 after spending eight years focused on the public relations, marketing and branding for Winston-Salem State University.  Three years at the Sales Factory (now SFW after the acquisition of another company) prepared me for being offered a fantastic opportunity with Mack Trucks – a member of the Volvo Group – in global brand management.  After two years I transitioned to the marketing team at Mack Trucks where I had the chance to work on some very meaningful projects that prepared me for my most recent endeavor leading a great group of Marketing & Communications professionals at Gilbarco Veeder-Root, the worldwide leader for retail and commercial fueling operations.

I would like to think that I have a unique skill set that combines marketing, strategic communications and relationship management.

I push hard but the truth is I expect greatness of myself and greatness of others. As a self-proclaimed developer of talent (I have heard it from other people too), there are few things more satisfying than identifying the strengths of others and putting them in positions to succeed.

I received my undergraduate degree in political science from Niagara University and earned dual master’s degrees from Canisius College in Buffalo, NY. And yes, I miss New York.

Finally, while I am an excellent griller (I still call it – erroneously according to my Southern friends – BBQ) and baker (my cream cheese brownies are killer) and enjoy fine foods and wine, on a daily basis I have the dietary habits of a 12-year-old as I subsist on macaroni and cheese, chicken fingers and pizza.  If you can cover it in Texas Pete hot sauce, then it’s on the menu.

But enough about me.  If you really want to learn more, please visit my Professional Profile page.